What’s the Most Profitable Size for an Architecture Firm?

If you talk to the leaders of an architecture firm about their business strategy, the conversation typically starts with a discussion around size. In general, architects want to be large enough to attract the big, city shaping and legacy-building projects, but not so big that they are deemed too corporate to be design-centric. They generally want the prestige and market presence that comes with being a large firm, while enjoying the culture and entrepreneurial spirit we typically associate with a small firm.

In conversations with architecture leaders of different sized practices, I’ve noticed an interesting phenomenon. Small firms, in general, feel they cannot compete on price with larger firms because of unfavourable economies of scale. Comparatively, large firms feel they can’t compete on price with small firms because the significant overheads associated with running a large practice make them noncompetitive. In a separate study, RIBA predicted the death of the medium sized architecture practice because it was neither a boutique firm with low operating costs nor a large firm with economies of scale. Clearly one or all of these commonly held beliefs aren’t true.

Examining the problem from first principles, the law of Economies of Scale states that because a business is typically compromised of a mix of fixed costs and variable costs, it’s generally more efficient for most businesses to produce more rather than less. And if you think about starting an architecture practice, this would certainly hold true. Registration fees, professional indemnity insurance, office space, IT infrastructure, they all tend to involve a significant upfront investment and then lower marginal cost as you add more capacity. Thus you can understand that a practice of 50 people might reasonably produce one unit of architecture at a lower average cost than a business of 5 people.

However what is often forgotten is that unlike Harry Styles, economies of scale aren’t one directional. There exists a point where average cost starts to rise again. Diseconomies of scales, as the founding fathers of economics called them, besiege large firms who suffer from poor coordination, slow, inadequate or incorrect communication and insufficient accountability. If you ever find yourself talking to an employee of a large architecture firm that can’t admit to at least one of those ailments, there’s a fair chance you’re talking to a liar.

It’s also important to consider that the theory of economies of scale was developed during the industrial revolution, a time when the efficiency of manufacturing was the order of the day. Unlike manufacturing, where installing larger machines produces more output, the only real way to get more architecture is to employ more architects, and unlike machines, architects come with a simply impressive array of feelings, emotions and sensitivities. They don’t always play nicely with each other, and being god’s favourite little creative creatures, they tend to have a healthy disrespect for the kind of bureaucratic processes that allow large multinational corporations like banks to operate.

Conceptually then, a sweet spot must exist where a firm is big enough to do things with scale and efficiency, but not so big that they become beset with problems of communication and coordination. As with the majority of economic theory, quite where this mythological point is, is left wholly unanswered.

From my own personal experience, I had a theory that a study conducted by the anthropologist Robin Dunbar might hold the answer. In the 1990s, Mr Dunbar found a correlation between primate brain size and average social group size. By using the average human brain size and extrapolating from the results of primates, he proposed that the maximum number of stable relationships an individual could maintain, assuming an average sized neocortex was 147.8 people. This number has been shown to highly correlate with census data on various village and tribe sizes in many cultures.

I was interested to see if this theory might show up in architecture firms. To put it to the test I took a random sample of 270 American architecture practices from Design Intelligence. I separated the sample into two groups, those with more than 150 people and those with less. To assess efficiency, I divided each firm’s revenue by the number of staff. While this is a crude measure of performance, the majority of an architecture firm’s expenses are comprised of labour costs so it’s a crude measure that holds some water. The results were as follows: 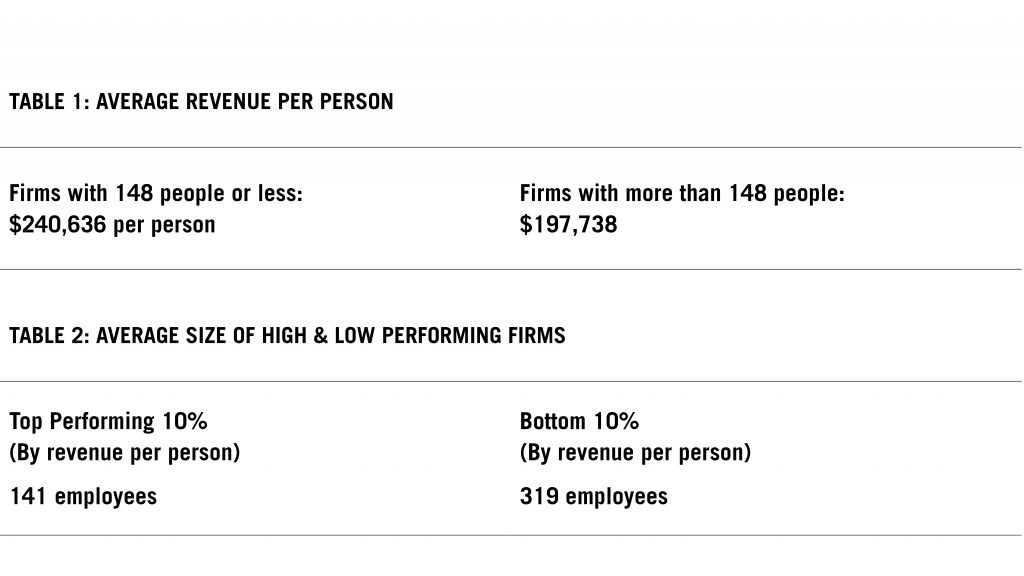 While two simplistic calculations do not a conclusion make, there seems to be a suggestion that I might be onto something. These findings are also supported by a 2010 study of 102 professional service firms during the years of The Great Recession. The sample selected included Architecture, Engineering & Construction, Technology, Accounting and Management Consulting. Within that sample, they identified 27 firms they dubbed ‘high-performance’. On a cumulative basis the High Performance group increased revenue almost 9 times faster at 6.5% greater profitability than the other 75 firms which they called Average Performance Firms. The average size of the 27 high-growth firms they identified was, drum-roll please, 130.8 people, compared to an average of 253.9 people for the lower performing peers. In further support of the premise that professional services don’t scale is Ed Wesemann – an expert business consultant to the legal industry, who remarks “Our anecdotal experience is that law firms in the range of 50 to 100 lawyers are routinely more profitable than many firms with 300 lawyers”.

This evidence gives us reason to seriously doubt the presumption that professional service firms scale from a financial perspective.  There is however, one notable exception. Gensler. Gensler are proof positive that it’s possible. With a staggering 3,700 people, they recorded a revenue per person of $290,798 and are listed 3rd in the world’s most admired architecture survey. To that, my only response has been to purchase a copy of Art Gensler’s Book, ‘50 years of hard-learned lessons in building a world-class professional services firm’.

I don’t think it’s any coincidence Mr Gensler chose to title his book this way. I think that what Arthur Gensler knows is that breaking the 150 barrier is incredibly hard work. Fundamentally, the practice must shift its focus from people to process or risk suffering diseconomies of scale. Firm management need to fight their intrinsic desire to deal with what’s in-front of them, right now. They need to care about their colleagues in different studios with the same enthusiasm as they do the ones sitting directly next to them. In essence, they need to fight their very own physiological composition. And as with all fights against human nature, it appears the odds are not favourable. In my analysis, 83 out of 270 firms managed a revenue per person better than $250,000, only 14% of those were larger than 150 people.